Did Anyone NOT See This Coming? 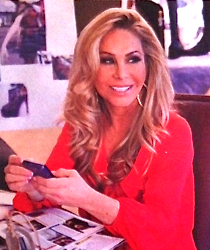 From day ONE of The Real Housewives of Beverly Hills you could see the adorable and feisty (my type of broad) Adrienne Maloof’s marriage was not only strained, but done. It was just announced that Ade and her husband of 9 years, plastic surgeon Dr. Paul Nassif, have ended their marriage. Apparently they’ve  had an open marriage for quite some time and knew of each others indiscretions. Oy. Why be married then, right? Now to deal with the hardest part of a divorce, the kids. They share 3 sons and Paul wants joint custody. Good luck with the details on that mess. Sometimes it’s easier when you’re broke. (via twitter)